EternityDev Wiki
Register
Don't have an account?
Sign In
Advertisement
in: Under Construction, Math Level, Topics,
and 4 more
English

Overture to the Sun
Bent and Broken

The Math Level is the first level of Advanced Education With Viktor Strobovski.

Since the Math Level is the first level of the game, it is much smaller than the other three levels (not counting the large amount of secret areas). It is generally very easy to navigate, even for new players.

It contains many of the main components of a level: classrooms, gardens, locked rooms, a supply closet, and a few of the game's most iconic characters. Notably, it also contains more secret areas than any other level, and five gem shards.

The Math level has four true endings. Each description begins at the event of collecting the tenth notebook.

As this is Puss mode, this is not a true ending. Viktor congratulates you for managing to collect all 10 notebooks. Then he tells you to get out of his school, and "play the actual game". Angell is then left to walk to the exit, and upon doing this she is then promptly returned to the title screen and given an achievement.

Viktor congratulates you for managing to collect "all" 10 notebooks. However, he reveals it's not over yet, and places a final eleventh notebook in the beginning classroom, telling you to collect the last notebook and remarking that it would be the hardest thing you'd ever heard of. The notebook counter in the top left corner of the screen then turns red and says MATH: 10/11 and after his speech, Viktor promptly continues to chase you. The 11th notebook will always spawn in the room that was the 1st notebook spawned in (in version 0.0.2a the last notebook used to spawn in a random classroom, but this was changed for being too difficult). In both modes higher than easy mode, a second neodymium magnet spawns in the first corridor from the Greeting Room. The final notebook is different from the others, with large two-digit addition and subtraction sums appearing. The fifth example won't be glitched like the previous notebooks: instead, it will be like the preceding examples. The notebook also won't accept any incorrect answers, and will force you to answer the questions quickly. If you successfully finish all five examples before Viktor catches you, he will just let you go as if the entire session was nothing, promising that he won't follow you (although if you turn up the sound, you will hear him laugh very quietly shortly afterwards). You can now use the exit door. However, attempting to use it will turn you around, revealing Viktor being straight behind you. He asks if you thought it was easy, and then quickly says no in a menacing tone, telling you that you will merely go to the next floor, and to the next teacher. You are then granted an achievement, and can now access the Language level.

This ending plays out the same way the normal ending does, with multiple exceptions.

Firstly, it only occurs if you have completed Albert before in the run. As a result of completing Albert, his operating table will turn upwards and crush him straight into the ceiling. His ghost will then appear in the main area, and will be a certain distance ahead of you towards the nearest notebook, and he will speak the answers to all of the notebook examples, excluding every fifth one that never loads.

Secondly, the eleventh notebook will not only have lots of addition and subtraction, but also multiplication, and in both modes higher than easy mode, also division, with all decimals being truncated at 5 digits.

Finally, when Viktor catches you at the exit door and asks you if you thought it was easy, he will be cut off in a glitched state, and then the screen will turn black. Shortly after, Albert will appear in front of you, thanking you for allowing him to escape his body. He will also give you two rusty forks, and plead you to continue your path and help "us", as a last hope. You are then granted an achievement, and can now likewise access the Language level. If this ending is repeated, Albert will give you another two rusty forks, commenting on how you losing the previous two isn't a problem as he has tons of forks stashed somewhere, wherever he is, and reminding you not to forget why you're here.

Note: After the eleventh notebook, Albert's operating table will disappear. This means the protagonist is forced to complete Albert while Viktor is still chasing them, making it significantly harder.

Beforehand, you must have answered every fifth unsolvable example with "666". When the tenth notebook is collected in this manner, nothing will happen at first, making it seem like the ending wasn't achieved correctly. But then, an extremely loud heavy metal music will play. Notebooks will spawn on every single desk in the school, making for a total of 318 notebooks. All of the new notebooks will be reprogrammed so that the first four questions all read "111+111+111+111+111+111", making the answer always "666". Shortly after, multiple Followers will spawn in the school and go after you at a steady pace. If they get too close to you, you'll lose sanity. The game will crash when you lose all of your sanity, but you can "abort" this ending if you collect one of the 318 notebooks and exit the school, though it's almost impossible to do it as there are many followers, and they move fast enough.

After the game crashed, if you boot it up at any other time than midnight, a clock at 12:00 midnight will be shown, and the game will close shortly after. If you boot up the game at exactly midnight, you will be teleported to the Red Forest. Once the clock in the red forest strikes twelve and the game crashes, you can start the game normally again.

In older versions, all of the textures in the school flashed between their original texture and deep, bloody flesh texture.

This ending is achieved if Angell spends a total of 7 minutes (420 seconds) looking at the Smile Dog painting. The easiest times to do this are while in Puss Mode, or after the eleventh notebook is collected.

When 7 minutes are reached, the Smile Dog painting will become extremely distorted for a second, and then completely disappear from its frame. Then, all characters will disappear, and paintings in the school will become blank. The school will be completely drained of colour, apart from the plants in the plant pots. The school also becomes brighetr. If Angell walks over to the Cafeteria, the school will become significantly darker, and the ambience will become slower and lower pitched, and a trail of bones will appear on the ground. This bone trail can lead two ways; one goes to a random classroom with nothing notable in it, and the other leads to Smile Wolf's hideout. However, the window blocking Smile Wolf's hideout will be replaced with an open passageway, allowing Angell to enter. After turning the corner, there will be a door, with Albert's skull in front of it. Walking towards this door will crash the game, so it's impossible to pick up this item.

See here for a full list of locations and areas within the Math Level of AEwVS.

See here for a full list of items found within the Math Level of AEwVS.

These maps were created by me, FendCat. If you see any errors or improvements that could be made, please let me know.

Please keep in mind that like everything, these maps are not perfect, so there may be a few minor errors. Click to see the full size image. 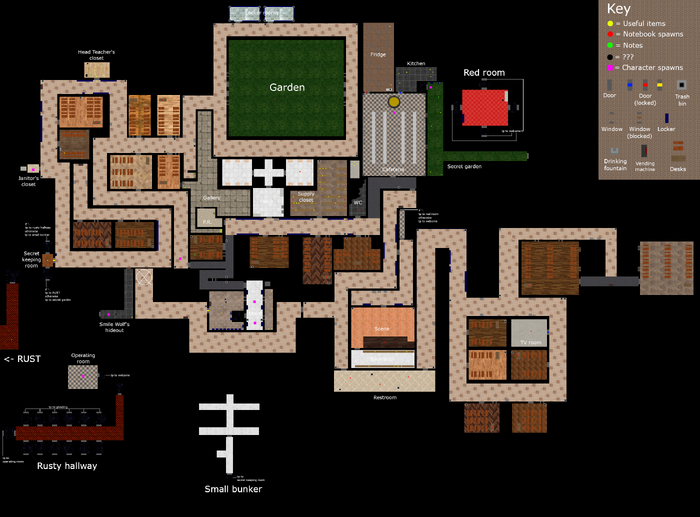 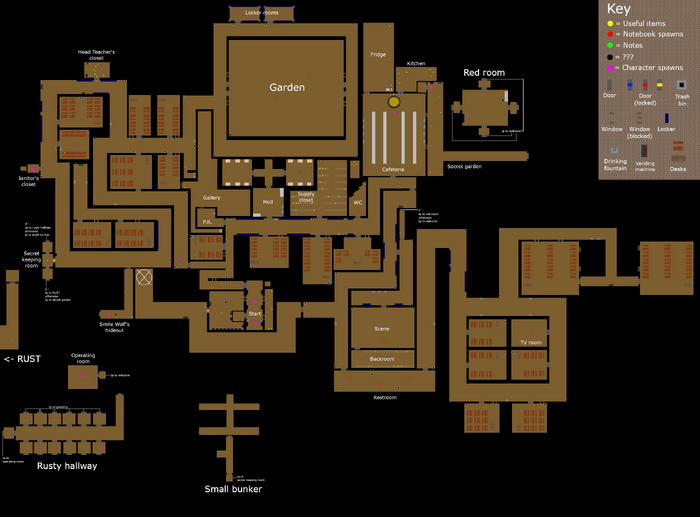 The welcome room, the location Angell appears in when you start the level.

The first classrom, where the first and last notebooks spawn.

Smile.jpg painting, which can activate a secret ending.

Janitor's closet, where Mr. Cleany Clean stands when he is not sweeping.

The scene. A notebook may spawn here, but unlike most notebooks, it requires jumping to get it.

The punishment room, where Laura sends Angell to if saw her violating the school rules.

The WC, before toilets and sinks were removed from here.

The backroom, where Viktor goes to if his jacket was ruined.

The restroom, that has a lot of trash.

Discussion room, same as the classroom but with a different layout.

The TV room. Requires the blue door key to access, in older versions a tape could be inserted into the VCR to play a video.

The cafeteria. Mr. Mix can be found here.